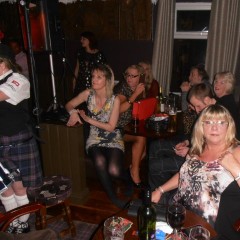 My name is Carolyn Best and I am the niece of Dorothy Cartwright. There were three siblings Jack Cartwright (Dorothy's husband) now deceased and they never had children Lillian Margaret Cartwright (never married) and also now deceased my mother Betty Cartwright married to Donald Hall and I am their only child and they are now both deceased.Up until my mothers death she called Jack and Dorothy at Christmas and other holidays during the year and after she died I carried on with this and also sent her photographs and dvd's of my husband three children and seven grandchildren. All this was brought to halt last Christmas when her telephone was disconnected. I then spent a frantic couple of months trying to find out what had happened. I called the local police (who told me that someone else was living in her house which turned out to be untrue they were mistaken). I posted on various Canadian websites looking for her and also posted on a facebook site about BC communities. Finally on February the 13th this year around midnight English time the phone rang and it was another policewoman saying she had found Aunty Dorothy in a nursing home. I was absolutely overjoyed and she gave me details of the Trust that had recommended that she was sent there. I contacted them and they gave gave me details of two POA's called Lynne Colbeck and her mother. When I finally emailed Lynne she said that she had no knowledge of me because there was no information about me at the house. This even though there had been vast amounts of correspondence over the decades.They also told me that the house had been sold. I eventually spoke to Dorothy (with some difficulty because both she and I are now elderly and somewhat deaf) and she was delighted to hear from me asking me about my husband children and grand children. When I mentioned that the house was sold she became very very upset and said she did not want it to be sold so I pretended that I was mistaken it was awful to hear here crying with nothing I could do. She asked me to phone back again which I did. I emailed Lynne and explained the difficulties with the phone and she said if I wrote letters she would read them to her. This I did and still do. Recently I got a message via the facebook page I had contacted from a lady called Lorraine Effa who was Aunty Dorothy's dog walker and she also visited her and she also said she did not want the house to be sold even though it is apparently in a bad state of repair. The agent who was instructed to sell is Roger Basi. I cannot get details from anywhere who gave him the instruction. I live thousands of miles away and am myself in poor health with copd and various other ailments and the stress of this is wearing me out.I need answers and Lorraine has been kind enough to spend time locating you and getting me your email address. Please reply to me as soon as you can. Kind Regards Carolyn Best